Please click the button to the right to view a video celebrating members who have been with us at least 50 years!

Click the button to the right to view photos of the celebration. 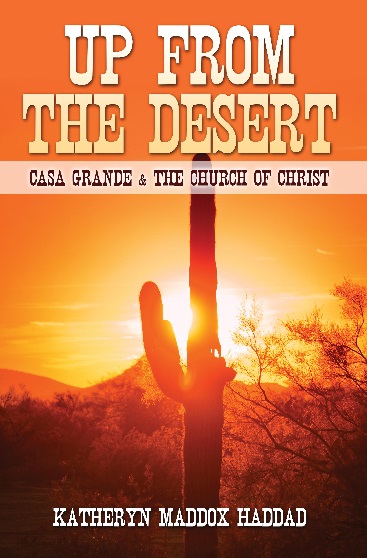 We are 100 years old as of 2017.  A history of our congregation has been put in book form. It is 400 exciting pages covering the first thirty years.

Nearly all of our original members came from families rich in the Restoration Movement.  They came here from Oklahoma and Texas, then from Arkansas and Missouri.  The book, Up From The Desert:  Casa Grande & The Church of Christ, tells which families came in which years, what everyday life was like for them here, and what their roots were in the Restoration Movement. Many pictures.

Casa Grande, a mining town in Arizona, began mostly as a tent city. The first meeting place of the church of Christ in the city was also a tent.

The city began with one street—Main Street—across from the railroad tracks. You will delight to read about when each street we use today opened up, when each building we visit today was built, and when various laws were enacted, such as registering whether or not a citizen had a fan, not bringing guns to town, and driving down only one side of the street.

Our first full-time preacher was Adrian Hon. His parents had taken him to Japan as missionaries around 1910 when there was still a bounty on the heads of Christians.  His ancestors were preachers back 100 years before.  His wife’s family ~ the Cartrights ~ came to Phoenix in the 1800s and began the first non-denominational church of Christ in Arizona.

We are offering this book at a special price of $10 plus postage. You can order direct from Amazon here:  AMAZON