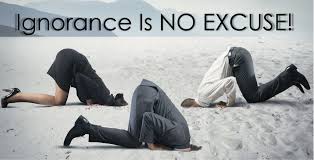 Jesus placed a burden, a responsibility on the Apostles. According to Matthew 28:19-20 they had to go to all the world and teach them of God’s will and the salvation that is only in Jesus. In teaching that Good News they had to–much like the old court injunction–tell the truth… the whole truth… and nothing but the truth.

In telling all the truth (Jesus called it “teaching them to observe all that I commanded you”) they were passing on to each new child of God the responsibility to also share the Good News with everyone else.

That leads us to an interesting and important question:

What About the Ignorant?

Have you ever noticed how often people have an opinion of God without actually consulting God’s revealed word? It is a frequent approach by people that do not actually follow the New Testament but, sadly, it is also often practiced by those claiming to be Christians.

Before you claim that this cannot possibly be so, consider how often you’ve heard someone discussing things about God’s will and say something like, “I think” or “I believe” as they give an opinion. Perhaps you’ve even been guilty of saying it yourself.

Opinions are nice things… sometimes. But we would all have to agree that failing to stop for a STOP sign is not a matter of opinion but a matter of law. The obvious principle for spiritual matters must be that, if God tells us the facts, if He sets the law of what is true and false, right and wrong, then we must agree with Him if we want to be right.

Once we understand and accept this fact, then we realize the seriousness of continued study of His word. Only when we first actually listen to and follow God may we be in agreement with Him. Amos the prophet asked the question: Can two walk together, unless they are agreed? (Amos 3:3, NKJV) We find ourselves out of step and unable to walk with our God if we do not agree with Him!

So let’s consider the question: What about those ignorant of God’s will? We ask it often in many ways and many times we find ourselves giving an opinion that is completely out of step, out of agreement with God! What about the person that has never heard God’s will and dies in their ignorance? Surely God wouldn’t send that person to hell!

The Apostle Paul wrote 2 Thessalonians in large part to deal with the question of how God will deal with unbelievers and false teachers when Jesus returns. Certainly, that question is of great importance to us today and is directly relevant to our question of ignorance.

In 2 Thessalonians 1:5-8 Paul says: (5) This is evidence of the righteous judgment of God, and results in your being considered worthy of the kingdom of God, for which you are indeed suffering. (6) For it is a righteous thing for God to repay with affliction those who afflict you, (7) and to give relief to you who are afflicted, and to us as well, when the Lord Jesus is revealed from heaven with his mighty angels (8) in flaming fire, inflicting punishment on those who do not know God, and who do not obey the gospel of our Lord Jesus. (Mounce-NT translation)

You will notice that I quoted that from a very literal translation that is actually used for teaching Greek translation. But the fact is, nearly every single English translation agrees with the Greek that punishment is coming on those who do not know God as well as those that do not obey Him. As a matter of fact, the only English Bible I found that implies another meaning is a work known as The Message; a work known for repeated intentional mistranslation. It says, Those who refuse to know God and refuse to obey the Message will pay for what they’ve done, and thus completely misses the force of what God actually says.

So, we can safely conclude that the only way to claim ignorance of God’s word as an excuse in the Judgement Day is to pervert what God actually says. Oops! That’s NOT a good opinion to hold, is it?

Consider one last point. If people can go to heaven out of ignorance then there’s not any point in the Great Commission! Think about it! Why should we try so hard to teach people of Jesus if they would actually be better off in ignorance?

God actually has that discussion with Ezekiel the prophet in chapter 33, verses 1-20. Since Ezekiel was given a commission by God to speak God’s will (much like Jesus passed on to us all in Matthew 28:19-20), he is responsible only for his failure to preach the truth. If others listen and obey God’s will, their salvation is assured. If others choose to ignore God’s message then they bear the burden of their sin.

Never does God make an exception for ignorance. We know God’s will and we are responsible for sharing that Good News with others. It’s time for us to get busy because ignorance is death.