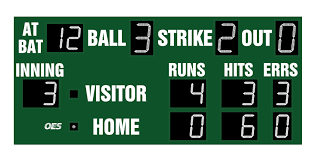 The Apostle Paul often used the sports and games of his world as lessons for Christians. While I doubt that everyone in New Testament times was a sports nut, they still made important lessons. Let’s take a look at a modern sport with a similar spiritual lesson for us:

Manny Trillo had a 17-year Major League career with the A’s, Cubs, Phillies, Indians, Expos, Giants, and Reds. In that time he was a repeat All-Star and won multiple Gold Gloves for his defensive play. He set a Major League record (since broken) with 479 consecutive errorless chances. Think about that a moment: 479 straight times he could have made an error and did not.

The most amazing thing about this story is not that he didn’t make a mistake but rather his attitude. As great as Manny Trillo was with his glove, he knew there were always errors. A bad throw. A bad hop. Broken double plays. In baseball, there are (currently) 162 games a year. A minimum (usually) of 1,458 innings in the regular season. That’s not counting pre- and post-season games. Baseball is an every-day-of-the-week game.

In baseball, perfection is technically (just like in Christian living!) non- existent. True, there are tons of statistics kept to see how close you get to perfection. But Manny Trillo lived and played by the philosophy, “The best thing about baseball is you can do something about yesterday, tomorrow.”

If you make a mistake and want to actually fix it, there’s always tomorrow’s game. Next time, you have the opportunity to undo the mistake and do it right.

This holds true on defense and just as well on offense. If you follow baseball you will quickly notice that everyone’s batting average is measured in three decimal numbers. What that means is if you get a hit every single time that you come to bat you would be batting 1.000. But no one ever does that!

In fact, no one ever comes close! In a single season of baseball, the great Ty Cobb hit .420! (For you trivia fans, Nap Lajoie holds the record average with a .426 season.) Ty Cobb’s lifetime career average was .366.

The best players in baseball history missed hitting the ball 1½ to 2 times for every time they hit it. Their mistakes totaled one and a half to two times their successes and they were the best! The best of most players is closer to the twice as many whiffs for every hit!

So what does all this about baseball have to do with us as Christians? The New Testament is constantly advising us as Christians to take the same approach to our “game,” our lives. The very use of the words repentance and forgiveness are God’s reminders that we can have another chance. How we use that next chance will always be what shows our real character, our real spirituality!

I believe the Apostle Paul, with his interest in sports, would have appreciated this analogy. After all, he wrote, “Therefore let him who thinks he stands take heed that he does not fall” (1 Corinthians 10:12).

James wrote, “Therefore, confess your sins to one another, and pray for one another so that you may be healed” (James 5:16a). And John wrote, “If we say that we have no sin, we are deceiving ourselves and the truth is not in us. If we confess our sins, He is faithful and righteous to forgive us our sins and to cleanse us from all unrighteousness.” (1 John 1:8-9)

God is very clear in telling us that we are not perfect. Just as “all have sinned” (Romans 3:23) and need Jesus to save them from their sins, we all continue to be imperfect.
Certainly, this doesn’t mean we stop trying to be perfect. No baseball player is worth anything if they are a quitter and the same is true of a Christian! But when you do and try and fail, then the answer is not to give up. The answer for saints is always found in keeping on keeping on, in trying our best to do better tomorrow!