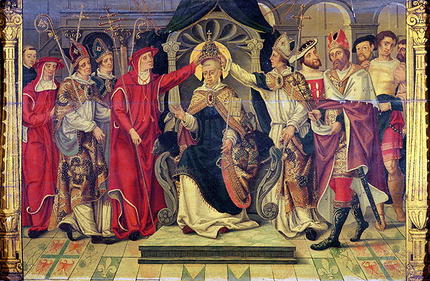 Believe it or not, a large part of the way most protestant denominations worship today is a direct influence of the Roman Catholic Church, and their influence was the Old Testament.  Some readers will throw up their hands in horror at the thought.  Follow the pope?  Never!  But it is true.

Many Catholic additions to and changes in our worship were resurrected from the Old Testament Law of Moses.  Most are nearly carbon copies of Jewish worship except for animal sacrifices.  There is even a movement among Protestants to rebuild the Temple on its old foundation in Jerusalem.  What in the world for?!  God destroyed it.  How arrogant of us.

Also in 250, some bishops began saying people could not receive the Holy Spirit, even after baptism, unless it was conferred by the bishop.  This became church law in 1275.

In 318 AD, it was declared that the church creed has supremacy over anything written in the Bible.

In 451 AD the church said that people had to go to the clergy for a clear interpretation of the scriptures.

That same year, priests began wearing sacred vestments, copying priests under the law of Moses, and it was made church law in 850 AD.

Also in 451, the Roman Church insisted church heads refrain from changing their dress to the more modern styles, saying they must imitate the clothing of our first parents, Adam and Eve.  It was also in imitation of the Jewish practice of the priests wearing special vestments for respect.  It was made official in 850 AD.

In 600 AD the church declared that its traditions were to be kept in matters of salvation and worship, regardless of what the Bible said.

In 666 AD musical instruments were introduced into Christian worship, copying the Jews who had instruments during the daily worship at the temple.

In 1095, common Christians were told they could take the bread if given by a bishop, but not the cup ever, by copying Old Testament Jewish priests who drank the wine part of the sacrifices.

In 1215, taking the Lord’s Supper was declared to be necessary only once a year, copying the Jews who celebrated the Passover Feast once a year, and it became church law that same year.

In 1547, the Catholic Church declared ministers and pastors had to be ordained, copying Jewish priests and Levites being ordained in the Law of Moses.